Atlantic City, the city of gambling, shopping, and much more… The ’20s are the golden ages of the city when tourism reaches its peak when in some of the states there is a prohibition of alcohol, so-called dry counties. Alcohol and gambling never stop and that attracts many tourists all around the States. This period is well described in the TV-series Boardwalk Empire which I love. An interesting fact is that this city had the first boardwalk in the U.S. (thank you, @Ken Dowell, there is always something I can learn from you! Follow the link for more of Ken’s stories). And besides the fact that in the last years the city lost some of its charms, it is still a destination attracting not only Americans. Because of every walk around the streets of Atlantic City could be really surreal.

Our first stop in the city was when we were on our way to Wildwood. The bus station brought us the feeling like we were in the Hollywood movie, many hobos and strange people all over the place. After that, this memory vanished very quickly because we had the chance to visit Atlantic City many times for some shopping, walks, and enjoying the Atlantic Ocean from the beach.

Below is my story in pictures. Sometimes it’s enough only to look at some wonderful photographs, right? Enjoy! 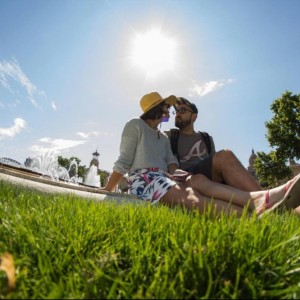